Although considered one of the pioneers of Finnish graphic art, the nearly 400 prints made by the beloved painter Hugo Simberg (1873—1917) are relatively little known. Helped by Finland's national artist Akseli Gallen-Kallela, Simberg became familiar with printmaking in Ruovesi in 1895. He mainly worked with etching, but also made a number of woodcuts in his youth and, since 1906, also worked with soft ground colour etching.

His extensive output of prints includes a number of portraits and character studies, landscapes, and works incorporating his trademark motifs of death and demons. Many of his winter and summer landscapes were created at the Niemenlautta family estate on the northwest shore of the Vyborg Bay.

The Oulu-based art collectors Ismo and Mervi Sirén have collected prints for more than 25 years. They obtained their first Simberg in 2011. Ismo Sirén, a violinist with the Oulu Symphony Orchestra, reminisces: ‘We did not even have a proper sofa in our home for the first five years after we had married, but somehow always found the money for prints. Art creates a sense of peace. When playing my violin, I often stop to gaze at the paintings in our living room.’

Their collection includes a little more than twenty works by Hugo Simberg, including his very first and last prints – A Finnish Elegy (1895—1896) and Kaskisavua (Slash-burning Smoke, 1917). In the words of Ismo Sirén: ‘I often take a magnifying glass to examine the prints, and I am always marvelled by their exquisite details.’ Ismo Sirén is especially enchanted by Simberg's way of drawing directly onto the prepared tile without creating any draft versions. ‘The image is shaped in the mind of the artist, and is transferred directly onto paper, fabric or tile. Simberg only seldom continued working on a print after the first version.’

The Simberg prints in the Sirén collection are after prints, which have been produced in very limited numbers by the artist's heirs. According to the specialists of the Ateneum Museum of Art, no prints made by the artist himself exist of many of Simberg's works. The list of Simberg's print works created by curator emeritus Heikki Malme of the Ateneum print collection in 1989 covers Simberg's entire print output, and also includes the after prints.

Photo above: Hugo Simberg, The Peasant and Death at the Gate of Heaven 1902 (part of artwork). Collections of Ismo and Mervi Sirén. Photo Mika Friman 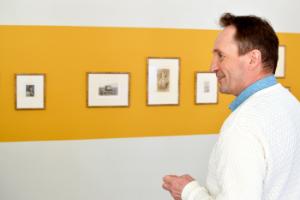