Since her debut exhibition in Helsinki in 1967, painter Terttu Jurvakainen (1939–) has been stepping on the milky way of colours and soaring, as she once wrote in one of her poems. A Shining Palette celebrates Jurvakainen's career of 51 years as a painter and – also very importantly – her more than four decades as the organiser and a featured artist of the summer exhibitions in the art gallery of national renown that bears her name in the municipality of Muhos near Oulu.

The extensive retrospective exhibition showcases the milestones of Jurvakainen's output from the 1970s to the present day, and features a fresh video interview with the artist. Different decades have accommodated different stylistic periods, but expressive, often emotive use of colour as well as sensuous parallels have always played a key role in her large abstract paintings. “I feel I am an abstract artist in spirit. In non-figurative painting, I am fascinated by the creation of order and the compositional and rhythmic qualities of the colour surfaces. In my paintings, colour always plays the lead role and forms the foundation for everything else. My style of painting is very spontaneous, and sometimes quite fast, but at the same time intense and focused, often seeking a harmonious result.”

Jurvakainen’s non-figurative paintings are accompanied by landscapes and nature scenes, her beloved flower paintings, and female figures that can to some extent be interpreted as autobiographical. “I am often asked if my female figures are self-portraits. Yet in some fundamental way all my paintings are self-portraits, because I always feel fully involved both psychologically and emotionally when I paint.” Regardless of her subject, Jurvakainen never uses a model or sketches the work. Instead, she always starts working in a highly spontaneous manner. All of her paintings are born in the natural light of her studio. In the recent years she has mostly painted with oils using palette knife and brush – and heart and mind, as she playfully adds.

In addition to painting, Terttu Jurvakainen has since her student days felt a strong calling to literature and poetry. After winning the national J. H. Erkko poetry competition in 1968, she has written twelve collections of poems and two novels, and has authored one picture book. Her latest collection of poetry, Valo halkaisee pimeyden (“The Light Penetrates the Darkness”) was published in 2017. “There is time to write poems and time to paint paintings. Poems can be like paintings, and in some rare cases paintings can also be poetic.”

Terttu Jurvakainen studied painting in the Free Art School of Helsinki in 1966–1967 and studied printmaking in Helsinki Workers’ Institute. After graduating as a teacher from the Raahe teacher seminar in 1966, she worked as an art teacher, first in Lahti for a year, then in Muhos for a decade. Since 1979, Terttu Jurvakainen has worked a professional artist. She has held several private exhibitions in Finland and abroad, especially in Germany and Sweden, and has participated in numerous group exhibitions.

University of Oulu’s Faculty of Education awarded her the title of honorary doctor in 2009.

She is a member of the Finnish Painters’ Union, and has been a recipient of state artist pension since 2000. 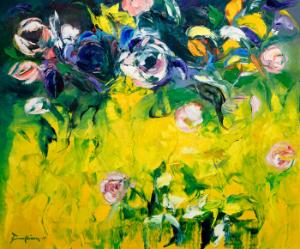 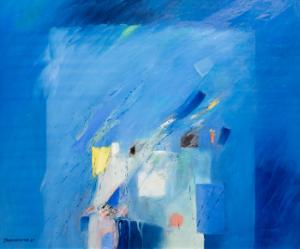 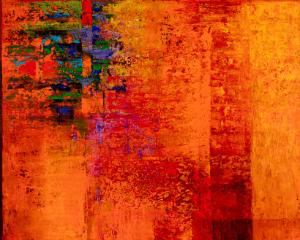 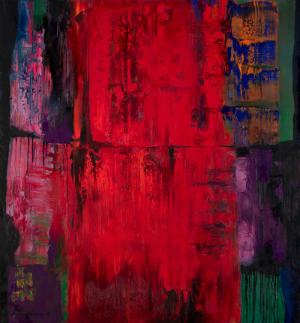 Terttu Jurvakainen, At the Source of Power, 2018. Photo: Mika Friman.