Outi Pieski (1973–) is a Sámi visual artist whose delicate paintings reflect the Arctic nature of her home region and the shared stories, cosmology and history of its important places. In her recent paintings, Pieski has focused on the primeval, intricate structure of the soil: the undergrowth of the forest, the fur of the animals, bird feathers and the textures of peat-walled huts.

The title of the exhibition, Čuolmmadit, is in the Northern Sámi language and means "to tie many knots". The name is a reference to a large installation named Falling Shawls – Čohkiideapmi (2017–2019), based on the knotted trimmings of the traditional Sami costume. The colourfully winding installation invites the audience to participate in a gathering of people dressed in traditional Sámi costumes, but it can also be experienced as an abstract landscape. The installation, originally commissioned by London’s Southbank Centre in 2017, is the joint effort of numerous masters of Sámi handcrafts, the duodji. “Handicrafts are our unwritten cultural heritage. It is an archive of a philosophy of life, and it is very important to keep it alive.”

As an artist and a member of the Sámi community, Outi Pieski is an active commentator on the decolonisation of the Sámi culture, the rights of indigenous people and environmental questions. In addition to paintings and installations, the exhibition features photographs from the series Kiss from the Border – Rájácummá (2017–2018), documenting the environmental artwork by Pieski, poet/musician Niillas Holmberg and artist/activist Jenni Laiti that consisted of eight Sámi-language poem installations built along the Teno river. The river forms the official border between the states of Finland and Norway, yet to the Sámi the Deatnu is an eternal symbol of connections and communication without borders. Another piece that takes a political stand is Colonialist Metamorphosis 1852 (2018), dedicated to the sarvilakki, a horned Sámi women’s headdress rarely seen since the early 20th century. Máttaráhku ládjogahpir (“The Horned Cap of My Ancestress”) is an art and science project by Pieski and archaeologist Eeva-Kristiina Harlin that highlights the history of the Sámi women from a fresh perspective. ”The horned cap is now relevant again as many Sámi women want to wear it in a demonstration of a certain attitude of strength and cultural vitality.”

In spring 2017, Outi Pieski was awarded the prize of the Fine Arts Academy Finland, which included a solo exhibition in the Espoo Museum of Modern Art (EMMA) in autumn 2018. In summer 2019, Pieski will participate in the Venice Biennale as part of the Miracle Workers collective staging an exhibition in Finland’s Alvar Aalto pavilion. Pieski has been awarded the William Thuring prize of the Finnish Art Society in 2016, and was nominated for the Ars Fennica award in 2015. She has created numerous commissioned works in the Sámi region, and has also made the painting Wordless Bringers of Joy for the Vesala function hall in Ylikiiminki, Oulu in 2010.

Outi Pieski graduated from the Academy of Fine Arts, Helsinki in 2010. She lives and works in the home region of her father’s family in the village of Dálvadas in Utsjoki, and in Numminen. 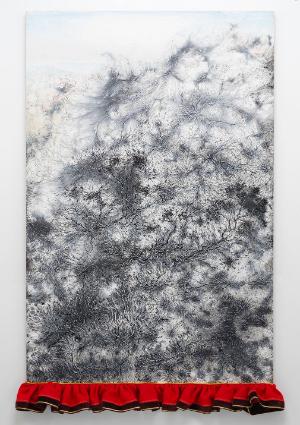 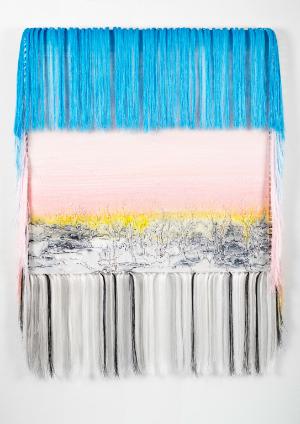 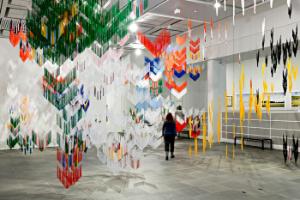