Exhibitions of the Northern Ostrobothnia Museum 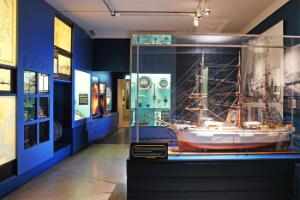 Welcome to a time trip 10,000 years back in time – and back to this day. The pre-history of Northern Finland and our rich folk tradition form the foundation of life today in our northern lands. The museum showcases the history of the city of Oulu and Northern Ostrobothnia in a memorable way. Our permanent exhibition brings items and information together into a fascinating whole. Genuine old items show how life was lived in the past.

The permanent exhibition of Northern Ostrobothnia museum focuses on how the city of Oulu was established and how it evolved from a town of craftsmen in the 17th century into a maritime hub of the 18th century, a centre of tar trade in the 19th century and a city of high technology of the 20th century.

Interiors decorated in the style of different eras show how seafaring and trade brought prosperity to the homes of Oulu. The story of the frigate Toivo ("Hope"), the courtyard of the Teppo house of Liminka, the old pharmacy of Pulkkila, the Merijal candy factory... the museum is a place of thousand stories that surprise visitors time and time again. Our eye-catcher is the miniature of the city in 1938 of nearly 20 square metres. 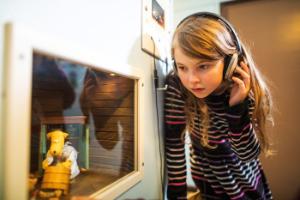 The miniature figures of characters from the famous Doghill series of children's books by Mauri Kunnas have delighted children and everyone young in mind for generations. The exhibition is best for children between 4 and 6, but is a wonderful experience for all ages.

Doghill days come to life through the lifelike dog figures that illustrate everything that happens during a year in the countryside: summer hay-making, autumn harvest and Christmas chores and celebrations. 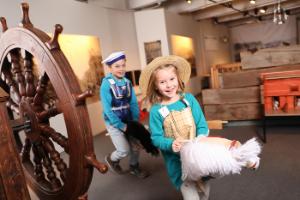 The Northern Ostrobothnia Museum houses a number of periodic exhibitions each year. The exhibitions are put together from items in the museum's own collections, produced by other museums, or created in collaboration between various parties. 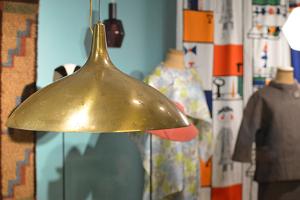 The roots of Finnish design – the design of decorative and everyday items, furniture, clothing, textiles, graphics and jewellery – go back more than a century. Along with visual arts and architecture, design was harnessed to support the new nation state that was looking for a national identity. The first national school for designers was also established.

Design first turned to the long tradition of handicrafts and natural ornamentation for inspiration. This style is usually referred to as Finnish jugend, or the national romantic period. In the period between the First and the Second World War, many designers were influenced by the new, modern way of life, and the functionalist school gained more foothold in Finnish design in the 1930s.

The ideals of functionalism included emphasis on light, function and purity of form. Straight, geometric lines and angles and Finnish materials were preferred. Functionalism manifested itself in Finland especially in the shapes of furniture and lamps used in public spaces.

The 1950s were the golden years of Finnish design. Artists from different fields were successful in international design competitions, and designers enjoyed increasing acclaim at home. A key factor behind the success was the versatile training of the artists and their deep understanding of the materials they used. Since the late 1930s, their artistic experiments had also received strong support from companies and factories. The material poverty of the post-war years produced the plain, almost minimalistic Nordic style, which nevertheless concealed certain richness, rhythmic power and unique details.

Towards the late 1960s Finnish design took a more commercial and industrial turn. Plastic was used as the material of colourful design products, and large print patterns were popular in textiles. Pop art and the space race inspired the designers, and appliances and machines increasingly became objects of design. The designer was regarded as part of the product development process, and the designer's responsibility was mentioned more and more frequently. As a consequence of the 1970s energy crisis the development of design slowed down for a while, but recovered again during the next decade. New techniques and materials, such as laser cutting and carbon fibre, were introduced. Especially textile and furniture design were transformed by the application and combination of new materials.

In the past few decades, new technology has played an important role in the shaping of Finnish design. The development of the electronics industry, for example, has required designers to reinvent themselves continuously. User-oriented design has become an important part of the design process, and environmental problems and overconsumption have inspired the designers to turn to ecological questions. More and more designers choose recycled or domestic materials as the raw material of their products. Clear-cut lines and high quality of the products have once again become key features of Finnish design.

During the 20th century, home decoration gradually reached all layers of the Finnish society in step with increasing standard of living and the building of the welfare state. After the First World War, the middle class had – like never before – prosperity it could spend on comfortable living. For much of the working class, home decoration became commonplace during the years of economic growth that followed the Second World War. Numerous new housing projects also accelerated consumption.

During the post-war reconstruction period considerable attention was given to home architecture and home decoration. Despite the material shortages, working towards a sense of a better future after the dark war years was the order of the day. Demand for both furniture and everyday objects were high.

The limited product selection of the reconstruction years became more diverse as production methods developed in the 1960s and the 1970s. Especially furniture trade grew substantially, and first furniture warehouses appeared in the outskirts of city centres. Increased availability of passenger cars and spare time made shopping trips from the countryside to provincial centres possible. Homes were now to be practical, informal and reflect the personalities of the inhabitants. Children and teenagers were given rooms and furniture of their own. Bright colours and new materials, such as plastic, were used liberally.

In rustic Finnish women's clothing, no difference was made between underwear and outer garments until relatively late. In the countryside, old outer skirts were used as underskirts, and shirts with long hems were used as both underwear and an outer garment. In the higher social classes the difference was more pronounced. In Western fashion, an undershirt worn beneath outer articles of clothing started becoming more common in the heart of the Middle Ages. Women have also worn corsets since the late Middle Ages up until the 1920s. They have been used to shape the body to the ideals that have been prevalent at the time.

In the west, women's underwear did not become common before the 19th century, but had been used irregularly in the previous centuries. They first became common with the higher classes – also in Finland. In the countryside, they were rare until the turn of the 19th and the 20th century. In Finland the open-crotch drawers, which extended below the knee and were open at the crotch, were a typical early model. They made it possible to urinate standing up while still being covered by the skirt. The open-crotch drawers were later superseded by the ‘closed-style’ drawers with a rear flap that could be opened for urinating or defecating. The drawers gradually became smaller. In the 1920s and the 1930s tricot fabric was introduced, and panties could be bought in a shop.

An undershirt worn by a young office secretary in Oulu and a Parisian-style corset.

A high-collar blouse made of tulle lace worn by a telegraph operator in Oulu, and panties made by a young lady in Tampere.

The garments worn by western women have varied considerably in terms of materials, shapes and colours over the centuries. They have, however, always consisted of a top and bottom part. In the 19th century women's styles of formal dressing changed many times, and often imitated older styles, such as antiquity and rococo. Women's dress sometimes aimed for a hourglass-shaped body, sometimes for a swan-like style.

The crinoline dress was in fashion for a short period in the mid-19th century. A cupola-like skirt that extended down to ankles was supported by a frame of metal hoops, the so-called crinoline petticoat. A corset was worn under a snug bodice, and sleeves were frill-like. The dress was used to achieve very slim waistline. The crinoline dress was soon superseded by the bustle dress. A corset that pushed up the breasts and made the stomach rounder was worn under the dress. Under the skirt above the buttocks was a bustle made of metal hoops and a pad that puffed out the rear part of the skirt. It gave the body a rather special shape that accented the waist and the rear. The bustle dress was also very snug, because the ideal that prevailed for most of the 19th century was slim and slender.

The first forms of the men's suit did not appear until the late 17th century, when the British upper class adopted a three-part attire consisting of pants, vest and jacket. All three parts of the new attire were usually made of the same fabric. In the 19th century the men's suit was updated a few times. One of the variants was the bonjour suit, a knee-length, almost invariably double-breasted jacket with waist seam and silk lapels. It was usually worn with striped or chequered long pants and a double-breasted vest. The bonjour suit and other men's suits invented in the 19th century are still made and used today.

A black silk and satin bustle dress made by a dressmaker in Oulu.

This dress was made by a tailor's shop in Oulu.