Visual artist Anni Rapinoja (1949–) and Hailuoto Island belong together like bark and pine, or ant and anthill. Rapinoja and her collaborators from the island – its plants, animals, soil and water – have been featured regularly in art exhibitions and museum collections since the early 1990s. Hailuoto is also where her studio, her childhood home and her family roots that go back 400 years are. Nature is always present and always close. It also dictates what is available and what can be done at any given time. The seasons give the rhythm to the artistic process: for exploring and photographing the nature; for collecting, cleaning and drying of materials; for thinking about technical and aesthetic matters; and for building and putting it all together. ”Compared to the actual implementation stage of each work, the development processes are often long, sometimes spanning several years”, Rapinoja says. The shapes of her works are often taken from the world of man-made objects, but nature always has the first and the last word. Its well-being – or lack thereof – defines the fate of the humankind because we are all part of the whole.

Rapinoja, a visual artist with a career of more than 35 years, was initially trained as a natural scientist and geographer. She describes her work as agreeable exploration that brings together the heritage of the farm home, her academic studies, her way of life, field work in the nature, and intuition. ”Every plant needs its own study process. No method can be used twice. When I know how the plant I work with wants to exist and when I know its character, we have mutual understanding and working together is a pleasure."

The overarching theme of Rapinoja's previous large solo exhibition – in the Kuntsi Museum of Modern Art in Vaasa in 2016 – was the sea. The current exhibition focuses on the forest, to which Rapinoja has a strong emotional bond, but the future of which is under threat due to climate change, the loss of diversity, high-intensity forestry and economical growth. In the current exhibition, the forest-themed video works and the works focusing on elks are new. The exhibition also features a number of installations complemented with new works, such as chandeliers made of animal droppings (from the Natural Lights series), the Archive of Mother Earth and Rapinoja's probably best-known and most loved series of works Wardrobe of Nature, primarily consisting of works loaned for the exhibition by the Kiasma Museum of Modern Art. The partly retrospective exhibition focuses on Rapinoja's work from the present millennium, but the oldest works go back more than 20 years.

”My wish is that the audience of my exhibition would assume the roles of both a viewer and a participant”, she concludes in reference to (among other things) the opportunity to rest on beanbags and yoga mats "in a forest" and under the works of the Natural Lights series. 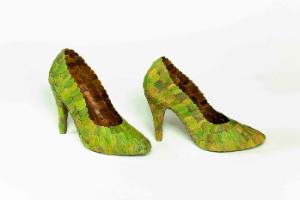 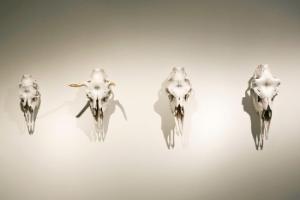 The Travelers, 2016,
in collaboration with moose (skulls of different ages). 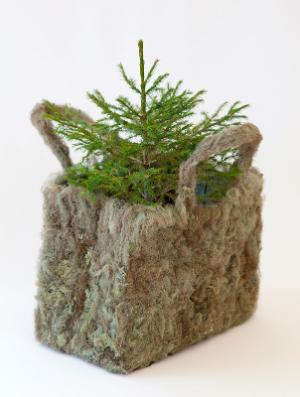