The Kierikki Stone Age Centre and the Stone Age Village, both built on the northern bank of the Iijoki River in Yli-Ii, are located on top of a large Stone Age dwelling site. 5000–7000 years ago Kierikki was the home to a thriving village culture on the banks of what was then the delta of the Iijoki River. The various dwelling sites cover a time range of approximately two thousand years.

The first known mention of ancient structures found in the Kierikki area dates back to the 19th century. When archaeological studies were started in 1960 due to building of hydroelectric power plants in the river, thousands of Stone Age items were unearthed. More extensive studies were started in the 1990s when dozens of previously unknown traces of dwelling sites – in other words foundations of Stone Age houses – were found, along with wooden fishing equipment dating back to Stone Age found in the nearby Purkajasuo swamp.

Kierikki in the Stone Age

The oldest dwelling sites of the Kierikki area were found near Pahkakoski rapids in the Iijoki River, where the inhabitants arrived approximately 7000 years ago – shortly after the land had risen from the sea. Salmon swimming up the river and plentiful populations of seals attracted inhabitants, who collected and hunted everything they needed from their environment. They also knew how to produce clay pottery, which was used to store food.

Kierikki was inhabited around the year approximately 6000 years ago – perhaps even earlier. Back then, the annual average temperature was approximate two degrees higher than today. Thanks to their efficient fishing and hunting methods, the inhabitants had enough food for the population to grow. Seal skins and seal fat, also called train oil, were valuable trade goods, which could be exchanged for flint stone coming from the White Sea and amber jewellery from the region of what are now the Baltic Countries.

It appears that a little more than 5000 years ago the coastal villages of the Bothnian Bay had high population density and were well organised. This is indicated by their large-scale, well-planned construction projects such as long terrace-house-like dwellings and stone structures. Relatively soon, however, the villages started breaking up and population decreased. The key factor that caused the decline of the village culture was probably a cooling climate.

For more fascinating stories of life in the Stone Age and the items that have been discovered in Kierikki, visit the constantly changing Stone Age exhibition in the Kierikki Stone Age Centre!

The Kierikki Stone Age Centre arranges archaeological excavations open for everyone at the Stone Age dwelling site. Over the years, open excavations have been used to study most of the Stone Age village dating back 5500 years, producing a wealth of information about the past inhabitants of the area.

In summer 2017, the Stone Age roots of salmon fishing were explored when archaeologists Satu Koivisto and Don Butler studied the marks lefts in the soil by fish bones in a Stone Age fireplace using completely new methods. 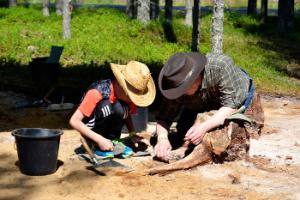 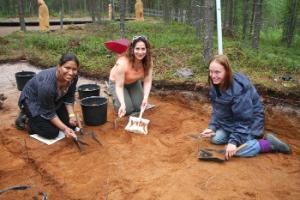