The Modern Woman, an exhibition produced by the Ateneum Art Museum and the Finnish National Gallery, introduces four uncompromising, expressive painters who lived and worked the way they wanted and established themselves as role models for the following generations. Helene Schjerfbeck (1862–1946) was a renowned artist from an early age in the 1880s. Ellen Thesleff (1869–1954) made her breakthrough in the first years of the 1890s. Sigrid Schauman (1877–1979) studied during the first decade of the 20th century, and Elga Sesemann (1922–2007) trained herself as an artist during the war in the 1940s.

ll four artists were very aware of their talent and skill. They were genuinely international, worked abroad for extended periods, and painted until the end of their lives – although Sigrid Schauman, an art critic who lived to be 101 years old, was not able to dedicate herself to her art before reaching 70. Especially Schjerfbeck, Thesleff and Schauman worked on their techniques and developed their methods of expression until a very advanced age.

Although women still had to walk a tightrope between gender role limitations and personal and professional ambitions far into the 20th century, the artists featured in the exhibition seized the opportunities presented by social development towards equality and access to training, experimented with new art styles, and successfully created their own ways of expression. Many international art styles found their way to Finland through female artists. Although modernism is often linked to abstract art, Finnish modernism between the First and the Second World War was primarily figurative. This is also the case with the four artists presented in the exhibition; of them, Thesleff ventured closest to an abstract mode of expression in her work. They also share an uninhibited relationship to self-portraits, and a love of light and colour. Especially Schjerfbeck is impossible to categorise as an artist belonging to a certain style: instead, her artistic output features several different periods and painting styles. Elga Sesemann's paintings from the 1940s and the 1950s, on the other hand, reflect the influence of post-war expressionism and surrealism.

The Modern Woman features approximately 50 artworks, all of them from the 20th century. In addition to paintings, the exhibition includes Thesleff's innovative woodblock prints and sketchbooks. The largest selection of paintings in the exhibition is from Helen Schjerfbeck, whose works have never been displayed in this extent in the Oulu Museum of Art. The least famous of the four, Elga Sesemann, who passed away in 2007, has not been properly recognised until the past few years.

The exhibition, produced for international circulation, has toured New York (2017) and Stockholm (2017–2018). In Finland, The Modern Woman is only on display in the Oulu Museum of Art. The exhibition is curated by Ateneum Art Museum's curator Anu Utriainen and museum director Susanna Pettersson, who has said the following about the exhibition's premise: ”One of the key questions of the exhibition is how it was Finland, of all countries, where women were able to choose the relatively insecure profession of the artist – and doing it safely, supported by the society.” 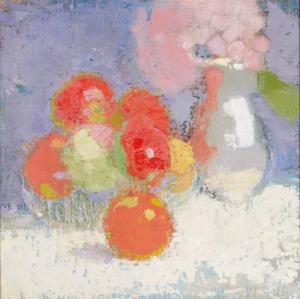