Oulu Museum of Art holds Finland’s most important collection of paintings by a painter admired for his depictions of North Ostrobothnia and the flatlands, Vilho Lampi (1898–1936). The collection was augmented in 2018 by a large landscape panorama donated by NCC Suomi Oy.

The small scale exhibition (18.6–4.8.2019) includes watercolours from the Vilho Lampi collection donated by Senta Teräsalmi and Siblings (1934), a painting acquired for Oulu Museum of Art this year.

Liminka Landscape (1925–27) is an expressive work depicting the evening hour on flatland tinged by the light of the setting sun. The rural landscape in shades of yellow, red, green and blue is at the same time a mindscape. A heavy cloud of smoke spreads over the village, belched into the sky from the chimney of Liminka dairy that stands on the horizon. The winding Liminka River in the foreground meandered close to Vilho Lampi’s family farm near Matinlauri, so the painter probably worked on the view not far from his home. At times, he would deliberately alter a landscape, a setting or the locations of buildings and their relative dimensions to create a desired effect or mood. In the growing and harvest seasons, Lampi’s days were spent working on the farm, but on light, balmy summer nights it was still possible to set out on painting trips.

The Liminka panorama is not marked with a year of completion, but judging by the painting technique and style it is estimated to have been completed in 1925-1927. At some stage, the painting has been transferred from the original stretcher frame to a smaller one. Old tack holes can be seen in the canvas’ tacking margin and on the right-hand edge a clean scissor cut runs through brushstrokes that extend beyond the frame. Historical artworks have their own individual history of ownership and incident, and we lack details of the provenance of this painting, which at some point found its way into the collection of NCC Suomi Oy due to company restructuring. The painting has been conserved and restored at Oulu Museum of Art. 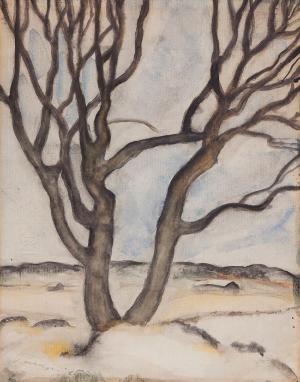 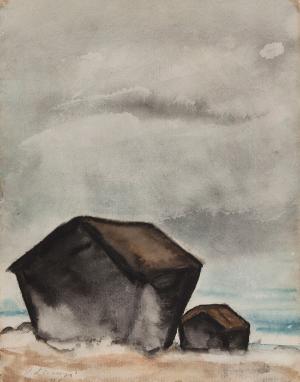 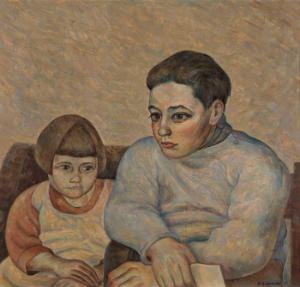