Marie from Germany will be our Comenius assistant during the scholastic year 2012-2013.

"Working in a Finnish school was a great opportunity to learn, to do something useful and have fun at the same time." (Kasia, a Polish Comenius assistant teacher)

According to the curriculum of our school, the focus of foreign language teaching is on oral communication. Year after year, we have decided to send in application for an assistant teacher, because the possibilities of practising oral skills of a foreign language are a welcome addition to teaching.

We have had a chance to have a person with strong pedagogical knowledge and skills as help during English lessons. Thus, our school has got with low expenses a skilful and highly motivated adult, who is also willing to learn, as a member of the staff. Most adults working in the school have also expressed their joy about the daily use of English encouraging them to speak a foreign language.

The pupils are offered a possibility to talk in a foreign language with a person who has a natural attitude towards pupils. As the pupils little by little realize that they understand and they are understood, their courage and self-confidence are increased. Getting to know an assistant teacher has been for many pupils the first contact with a foreign person, so it also supports global education of the school. Learners with different skills make use of assistantship in different ways. 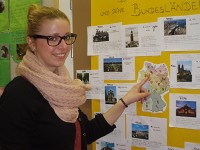