Convention on the Rights of the Child 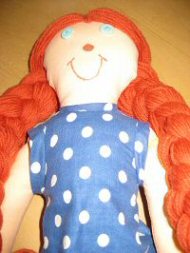 On Saturday, September 10, we had our 13th UNICEF Walk in Myllyoja. The theme of the Walk was "Schools For Africa". The aim of the campaign is to offer 8 million African children a possibility to take part in high-quality basic education by the year 2015. During the day, more than 5000 euros were raised for UNICEF. In addition to the pupils and staff of Myllyoja School, the result was made possible by a great number of parents, grandparents and other sponsors, the Parents' Association, the Areal Team of the Myllyoja Area, Myllyoja Youth Centre, Oulujoki Parish as well as many enterprises and private people who supported our efforts with many donations. Global responsibility for our common environment is also an important part of UNICEF School work. That is why the Green Flag was flying from the pole.

At the end of September, new VERSO pupils and teachers were trained for their task. VERSO is a mediation method based on solution-making. it is an alternative and voluntary way of solving conflicts between pupils in everyday school life. An important aim is to promote interactive skills between pupils.

The first UNICEF pupils from the 5th and 6th grades were nominated. Their task will be to plan different UNICEF events and to give UNICEF-related presentations.

In November, we again had our traditional Swopping Day. Second-hand books, games, toys, posters and comics got new owners.

In November, a big group of voluntary grandparents, parents, pupils and teachers gathered together to make Anna and Toivo dolls for the sixth time. We all felt togetherness and a great joy as we know that one adopted doll saves one child's life somewhere in the world.

In January, Ms Päivi Paakinaho from Plan Finland gave the 4th-6th-graders lessons on the rights of the child. The pupils were asked to think about important things, which are necessary on a desert island. The first things to come into their minds were pure water, food, shelter and warmth.

On February 2, we spent the Literacy Day of the UNICEF Schools and the Green Flag Day. Pupils and teachers discussed the importance of literacy. Pupils gave immaterial presents to each other and children in the nearby kindergartens by reading stories and fairy tales to them. The celebration of this day has also become one of the traditions of our school.

On March 16, the singer and actress Eija Ahvo, a UNICEF Goodwill Ambassador, visited our school. She told about children's life in Africa, the significance of wells and pure water as well as the importance of school attendance. She sang and taught us some songs and we also watched a film on a Tanzanian girl, Paulina. The UNICEF pupils of our school had prepared some questions for Eija; they were interested in a UNICEF Goodwill Ambassador's work, in particular.
Eija encouraged pupils and the staff to continue the important work we have as a UNICEF School been doing for years. She said it is important for parents to serve as models to their children. This is how helping moves as an unbroken chain and as part of everyday life from generation to generation. No big sums of money are needed; helping does not cost a fortune.

On March 22, we had a workshop day, on which we celebrated International World Water Day - a day annually held on March 22 as a means of focusing attention on the importance of freshwater and advocating for the sustainable development of freshwater resources. 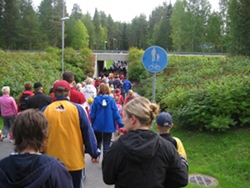 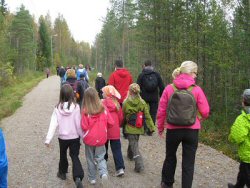 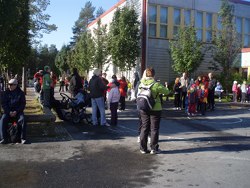