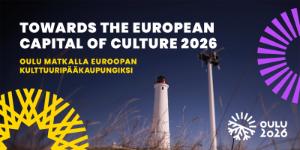 Oulu - Towards The European Capital of Culture 2026!

The Light of the North, Oulu, is bidding for the European Capital of Culture 2026. You are more than welcome to join us. Everything is possible! Oulu2026 Events
Upcoming and past events The Journey to European Capital of Culture

The City of Oulu will bid for the European Capital of Culture title for the year 2026 after the City Council decided in accordance with Finland’s 100th Anniversary/centenary celebratory decision. Various working groups, set up by Mayor Päivi Laajala, are preparing the bid in close co-operation.

The bidding process brings together a wide and versatile range of experts in Oulu from various fields, including the field of art. The bidding affects everyone in Oulu as well as its neighbouring municipalities, both now and in the future.

The bid began with workshops in the autumn of 2017, where children and students were asked how they see Oulu in the year 2026. During the year, various workgroups began mapping partner networks, did planning work and aligned objectives with the urban strategy of the City of Oulu. In 2019, an application will be made and sent to the first qualifying round in 2020.

2021
Decision of the European Capital of Culture

2027-2035
The transfer of culture heritage is continued

Preparation of the City of Oulu’s new urban strategy started in the autumn of 2017. The City Council decided on the new strategy in February 2018.

The strategy goes by the working name Oulu 2026, the same year the City of Oulu aims for the title of European Capital of Culture.

Get familiar with the strategy here.

The City of Oulu is the capital of northern Finland. Oulu is Finland’s 5th largest city according to population. The city will continue growing and the city centre area is renewed. We aim to develop the city centre to be a place where people and comprehensive services come together.

The European Capitals of Culture (ECoC) are the most visible form of the European Union’s cultural support. The capitals of culture have been named since 1985 and are funded by the Creative Europe Programme. The nomination emphasizes the diversity of European cultures and enhances cultural exchange throughout Europe.

Since 2009, it has been decided to appoint two European cities each year as European Capital of Culture. Beginning in 2021, and in addition to the two selected cities, one city from an EU candidate country will be selected every three years. For the selected city, the event is a large-scale project that links its administration, stakeholders, culture field and public and private financiers together. For many cities, being The European Capital of Culture has led to long-lasting positive changes in culture, tourism, co-operation and urban landscape.