Villa Victor's language courses are open to everyone and free of charge.

Registration beforehand is not required. All groups gather at Villa Victor (Torikatu 23).

At the elementary level, there are three groups with the same content but at different teaching times. In addition, there is a 0 level class, Let's start, which is aimed to students without any Finnish skills. In this group a student gets the basic skills needed for the regular elementary level. Once this level has been achieved, the student may proceed to an elementary group.

Every group meets twice a week. You can choose a suitable group for yourself according to the timetable below. Registration is required when you first time attend the group. You will get a participation card which shows your own group. You may also attend other groups if there is space available, but you can register to only one group at the same time. The language skill level corresponds approximately the 0-A1(A2) levels in the Common European Framework of Reference for Languages (CEFR).

The University group starts later in the autumn
Teaching times: Mondays and Thursdays at 16.30-18.00

After the elementary language skills have been adopted, student may move to higher follow-up level. The language skill level corresponds approximately the A2 (B1) levels in the Common European Framework of Reference for Languages (CEFR).There are two follow-up classes with the same curriculum, gathering different times of the week.

Group 2 has been combined with

Advanced Finnish - For more advanced (Note the changes in the timetable)

From follow-up level it is possible to proceed a bit higher, advanced level. The language skill level corresponds approximately the B1 level forward in the Common European Framework of Reference for Languages (CEFR).

In the YKI-training class we practice exercises in different language skill areas, auditive and oral, which are also tested in the general language test. Information about the YKI-test is also available in this class. You can also participate in the course without the intention of attending the YKI-test. In addition, we practice functional Finnish skills with Discussion and Conversation exercises.

The language skill level corresponds to approximately the A2-B2 levels in the Common European Framework of Reference for Languages (CEFR). Exercises for and info about the common language test. (www.oph.fi/en/education-and-qualifications/national-certificates-language-proficiency-yki-frequently-asked)

Other Finnish classes continue on the web,until corona situation allows us to return to contact teaching.

If you have registered to the Teams teaching group already, you do not need another registration. The new groups will appear in the same environment as the summer teaching classes.

Note that you have to register to the contact teaching beforehand in multilingual assistance desk in Oulu10.

Summer teaching ends on 14th Aug, but there will be some exercises for individual studying until the end of August.

If you are already registered to the teaching group, no additional registration is needed, as the teaching takes place in the same environment.

Enrollment to the web teaching group:

- Sign in by sending an email to: veli-pekka.pelkonen(at)ouka.fi. Give your name and email address with which you can join the Teams teaching group.

You will get a reply message with a link to the teaching group and some information. Check the timetable up to see, when your group is online. 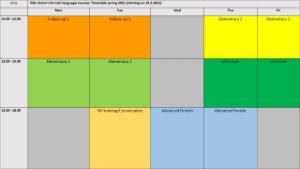 You can also study Finnish at these places:

What is Yki (National Certificate of Language Proficiency)?