At the elementary level, there are three groups with the same content but at different teaching times. In addition, there is a 0 level class, Let's start, which is aimed to students without any Finnish skills. In this group a student gets the basic skills needed for the regular elementary level. Once this level has been achieved, the student may proceed to an elementary group.

Every group meets twice a week. You can choose a suitable group for yourself according to the timetable below. Registration is required when you first time attend the group. You will get a participation card which shows your own group. You may also attend other groups if there is space available, but you can register to only one group at the same time. The language skill level corresponds approximately the 0-A1(A2) levels in the Common European Framework of Reference for Languages (CEFR).

The University group starts later in the autumn
Teaching times: Mondays and Thursdays at 16.30-18.00

After the elementary language skills have been adopted, student may move to higher follow-up level. The language skill level corresponds approximately the A2 (B1) levels in the Common European Framework of Reference for Languages (CEFR).There are two follow-up classes with the same curriculum, gathering different times of the week.

Group 2 has been combined with

Advanced Finnish - For more advanced (Note the changes in the timetable)

From follow-up level it is possible to proceed a bit higher, advanced level. The language skill level corresponds approximately the B1 level forward in the Common European Framework of Reference for Languages (CEFR).

In the YKI-training class we practice exercises in different language skill areas, auditive and oral, which are also tested in the general language test. Information about the YKI-test is also available in this class. You can also participate in the course without the intention of attending the YKI-test. In addition, we practice functional Finnish skills with Discussion and Conversation exercises.

The language skill level corresponds to approximately the A2-B2 levels in the Common European Framework of Reference for Languages (CEFR). Exercises for and info about the common language test. (www.oph.fi/en/education-and-qualifications/national-certificates-language-proficiency-yki-frequently-asked) 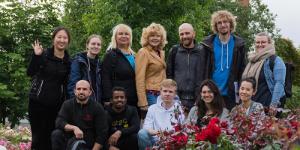 We will start the autumn's first Infos at 9.00 - 10.00 on Teams only due to the corona situation. On Teams environment, we are not able to provide any interpretation for time being.

If you want to give your contribution to the occasion and come to prepare and serve your national dishes and other specialities to the public.
If you are interested, please contact us at Villa Victor.

The occasion is arranged every year. Last time it was arranged on Oct. 3th 2019.

Trip to Sanginjoki to pick berries and mushrooms, autumn 2019. 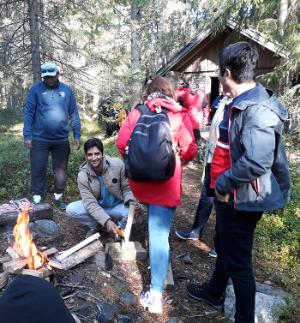