Oulu is the largest city in Northern Finland. Founded in 1605 by King Charles IX of Sweden opposite the castle built on the island of Linnansaari, Oulu is situated by the Gulf of Bothnia, at the mouth of Oulu River, which is an ancient trading site. The name Oulu comes from a word in the Sami language meaning floodwater. Oulu has been the capital of Oulu province since 1776. From being a town known for tar and salmon, Oulu has evolved into a growing modern centre of competence.

This is Oulu -booklet  (pdf)

Oulu - People and the City 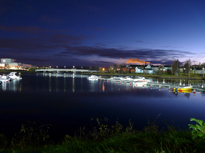