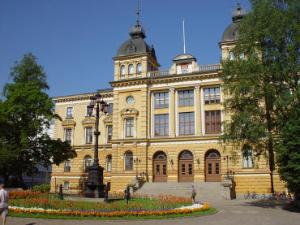 The Oulu City Hall was born around its heart, the assembly hall. The wooden hotel and restaurant Seurahuone, which was situated on the same site, was destroyed in the fire of Oulu in 1882, and along with it the only assembly hall in town. When the new Seurahuone, a neo-Renaissance stone palace, was built soon afterwards, the assembly hall had a major role in the design work.

The former Seurahuone assembly hall was taken into use on 29.10. 1886 when a banquet was held there to celebrate the completion of the railway line to Oulu.