From its foundation Oulu was headed by a council which was formed by members of the town's merchant class and a bailiff appointed by the king. On 26.12.1619, the council was converted by a statute into an administrative court to which the mayor was appointed as chairman. The town elders became the life-long actual representatives of the inhabitants. On 8.12.1873, an imperial statute abolished the privileges of the merchant class and the town elders were replaced by town councillors. On 1.12.1874, the Town Council was established, and the first Council meeting was held on 4.1.1875. The Finance Chamber affirmed its position as the town's treasurer during 1883. The law granting general and equal suffrage was passed in 1917.


The Finance Chamber was discontinued in 1927 and was replaced by the City Executive Board which held its first meeting on 7.1.1931. Its duty was to prepare matters for the City Council and to monitor compliance with the Council's decisions and stipulations. The present City Hall housed the Finance Chamber from the late summer of 1920, and the first meeting of the City Council in the building was held on 23.11.1920. The Council assembled in its first own hall on 21.12. 1920 and the present assembly hall was taken into use on 8.4.1980.

The City Executive Board held its first meeting in its present chamber on 13.4.1981. 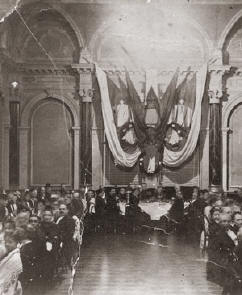