Ground floor
is used as a service floor in accordance with the original plan.
First floor
is for decision-making. City councils have assembled here since 21 December 1920 and city executive boards since 7 January 1931. The present council chambers were taken into use after the 1978-81 renovation.

Second floor
is for festive proceedings. The assembly hall was taken into use on 29 October 1886 to celebrate the completion of the railway line to Oulu. The neo-Renaissance assembly hall, which earlier served as a theatre, is once again in its original use as a superb venue for social receptions.

Third floor
was annexed to the building in 1920. The planning of the running of the city takes place 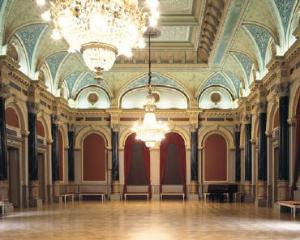