Oulu has always been an international region. It was created as such on that warm August day in 3321 BC when the first speck of land on which it now stands popped up from beneath the sea. During the great summer that we know as the Stone Age, the international aspect was the climate, which was similar to that of Paris nowadays. Badgers tunnelled into the hillside on Sankivaara, and the warm winds swished through the maple trees in the forests of Hangaskangas.

It was another thousand years before the climate of Oulu settled at the temperatures that we associate with the north nowadays. Oulu is in the north, we can't deny this fact. But not so far north that we can write off the other directions.

The first and most natural of these is the East. It is from there that the sun rises and the land begins to descend, from the rolling hills of Kainuu and Karelia down to sea level. First of all it was the water that set out on this downward journey, then the trace elements carried in it, and finally man, of the solid, resilient Finno-Ugric kind. These were the same people who also migrated further north, into Lapland.

The second direction was south, from where other people came to collect taxes. And, our people went to south to trade their wares long before they dared to set out over the great seas to the west.

People dreamed about the North, too, on many occasions, and sometimes went there. However, it is only in recent years that north has become an important direction again, or at least the Northern Dimension, as the Eurocrats call it. Oulu also provides a link in that direction – a gateway to the Arctic Ocean and the Barents Region.

Many people have come to Oulu from all points of the compass and set out to all points of the compass. It makes a good base. The very first inhabitants realised that this was a suitable place to stop and rest; the place where the East and the downhill part of the journey came to an end and the West loomed on the opposite shore, over the flat sea. There was enough game to be had, the waters were full of fish and money hopped from branch to branch in the trees on the backs of squirrels.

The earliest aliens in the lean days of the Iron Age were the other Finnish tribes, from Satakunta, Häme, Karelia and Savo. And very welcome they were too. After all, the journey had taken them far longer than it takes nowadays to come from Oulu's most distant twin town, Bursa in Turkey. Some of them even settled here, and we, the inhabitants of today, are their descendants.

The later visitors came from further away: first from Karelia, Russia and Sweden, then from Central Europe. Nowadays they come from almost everywhere under the sun. There is no definite proof yet of anyone from Mars, even though there were reports of UFOs almost every other day in the 1960s. But there is plenty of technology born in Oulu on board the satellites that are being sent to Mars. 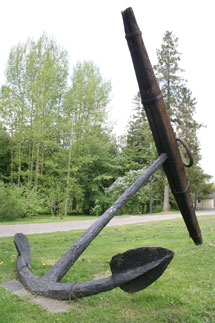