The City Hall was renovated in 1978-81. When the Administrative Court, Municipal Court, Finance Chamber and the departments of the City Construction Service had moved from the City Hall, the vacant premises were taken over by the city's central administration.

During the renovation, the main entrance of the building was restored to its original place in the middle of the facade. The kitchen and the canteen were extended and the tower rooms were converted into work premises. The Construction Service's secretarial office on the third floor was converted into an exhibition room and the next-door study into a reading room.

As the council chamber was converted into an entrance hall, a new location had to be found for the chamber. This problem was solved by connecting the former courtroom to adjoining storage facilities. The entrance porches were converted for use by the door-keeper and the telephone exchange. The City Executive Board chamber was built in the premises of the Finance Chamber. renovation consisted of modernising the whole of the interior of the building. Floor, ceiling and wall surfaces were renewed. The decorative paintings in the entrance hall and the VIP room were restored and the plaster mouldings were mostly remade. 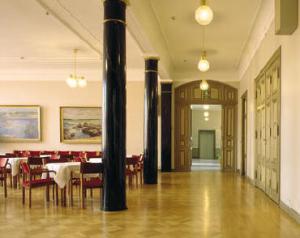 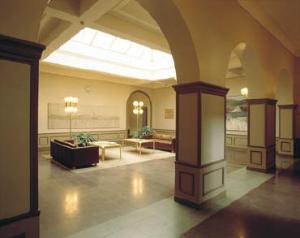