The City Theatre focuses on plays from Finland and abroad that have not been shown before. The theatre also stages an opera as well as other musical productions each year, in addition to plays for children and the annual International Theatre Festival for Children and Youth.

Each year, eight to ten premieres and about 20 guest performances are staged. An annual audience of 80,000 enjoys the performances.

The City Theatre has been renovated and expanded in 2002-2004; it stands proudly by the sea together with the City Library. 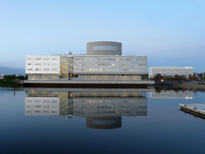 What's on in Oulu? Check out the VisitOulu.fi events calendar