The town of Oulu was founded on the mainland opposite the Oulu Castle island on 8 April 1605 by the edict of Charles IX, king of Sweden, to Isak Behm. The Oulu Castle was completed in 1590, and new industrial activity sprang up in the town as an armourer's workshop was established within the castle premises in 1614; to facilitate the drilling of the barrels of the guns made in the workshop, the king gave the order to build a drilling mill in 1617.

In 1610, the town was granted its privileges in which it was ordered that blacksmiths, tailors, shoemakers, goldsmiths, tanners, a carpenter, painter, chamois leather maker and hatter, and additionally bakers and butchers as many as required, were to settle in the town of Oulu. There were less than one thousand inhabitants in Oulu in the 17th century. 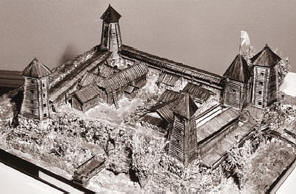