Mobile library was first discussed in Oulu already in 1951. However, concrete steps were taken only in 1966 when library director Sirkka Sassali was asked to plan the bookmobile routes. It was only later that 200000 marks were allocated for acquiring the bus and mobile library service started in 1975.

Mobile library "Matleena" was named after the driver-librarian Matti Lapola and librarian Leena Vähämetsä. The mobile library immediately became very popular. During the first week some 7500 were borrowed from the bookmobile, more than from the adult's department of the main library during the same period. In 1975 a total 176 345 loans were made in Matleena. It is still a record number during the mobile library service in Oulu. 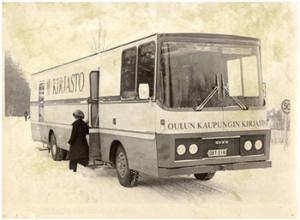 The second mobile library of Oulu City Library was delivered in the end of year 1989. The mobile library started its rounds in the beginning of the following year. The mobile library was used 11 months per year, and it had 47 stops. Ten of the stops were located at elementary schools, three at nursing homes. The other stops were in residential suburbs and in sparsely populated areas. Stops were also made at the refugee reception centre in Heikinharju, and in the provincial prison. The number of loans in 1990 was 98 694. 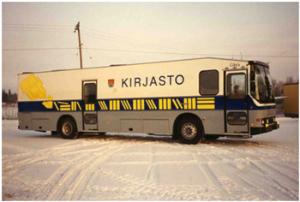 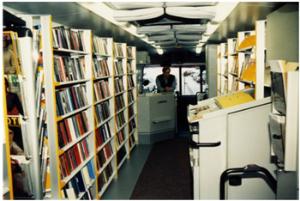 The small mobile library was introduced in 2001. Day-care centres are the biggest customer groups. Other customers include senior citizens and other special-needs groups for which the bookmobile offers library services in nursing homes and serviced apartments. Small mobile library also delivers materials to customers in their homes. In 2001 the small bookmobile had 84 stops, 76 of which were day-care centres and 8 were nursing homes and serviced apartment buildings. In 2011 the number of loans by the small and big bookmobile was a total of 159 983. 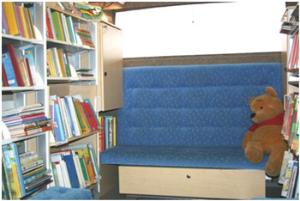 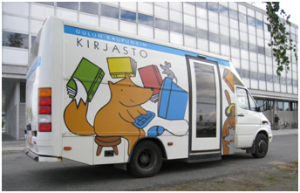 In 2005 a third big mobile library was acquired. In honour of the 400th anniversary of Oulu the registration was  OUL-400. There is space for some 3500 books. There are also magazines, audio books and children's music. The chassis is decorated by names and quotes of Paavo Rintala and 18 other writers that have worked in Oulu. 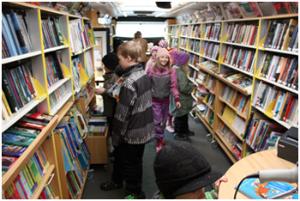 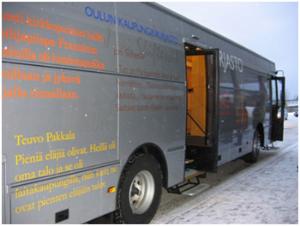 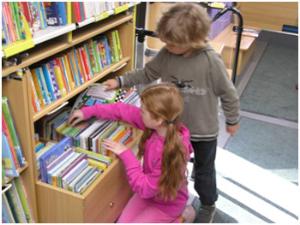 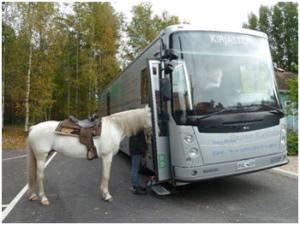 Onneli is the fifth mobile library for the Oulu City Library, and it will replace the old small bookmobile. The decoration is designed by illustrator, graphic artist Lea Virolainen. There is space for some 2000 books in the bookmobile.

The bookmobile Onneli serves children in daycare, elderly persons and special needs groups. The bookmobile also makes rounds at small elementary schools. Customers in wheelchair can access the bookmobile with a car lift for the disabled. The new library has a total of 110 scheduled stops.

Onneli offers children the opportunity to explore the library already before they start school. It is an experience to get to select books together with the day-care staff.  By request we also organize story hours and teach the use of library to pre-school children and school children.

Older people living in nursing homes can visit the bookmobile independently. By request we can also put together theme packages for nursing homes. 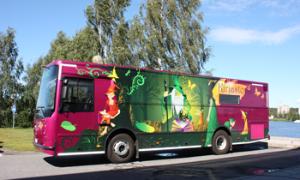